“The Tank, Infantry, Mk IV (A22) was a heavy British infantry tank used in the Second World War, best known for its heavy armour, large longitudinal chassis with all-around tracks with multiple bogies, and its use as the basis of many specialist vehicles. It was one of the heaviest Allied tanks of the war.” 1 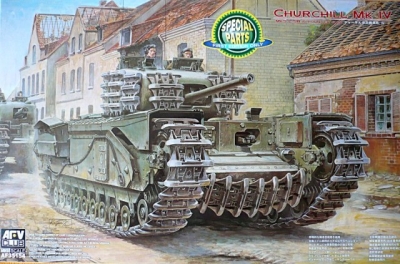 This was not a quick build. The hull is comprehensively broken down into many parts, with a complex arrangement for the wheels and suspension. But it all fits together nicely. Far more detail on these steps can be found here.

Once the two panniers were upright and joined to the hull deck panels the familiar shape began to appear. I decided to leave some of the track covers off as there are many period photographs showing this. Much small detail parts were then added.

The turret started in two sections which had to be joined and the seam filled in. Once done, I used Mr.Surfacer 1000 to restore the cast texture. The remaining pieces were added with no trouble.

Nothing to note apart from the occurrence of tearing off one of the decals with Tamiya masking tape when weathering the vehicle. I must say that I thought that bloody rude. Not sure how it happened – I had applied multiple layers of gloss and satin varnish over the decals at this point – but I luckily had spare decals to do late stage repairs.

The Churchill tracks are especially prominent so there was no question of not using the Friulmodel metal ones. They were treated in the usual manner – burnishing with Blacken-It, multiple washing with a mixture of  Winsor and Newton Raw Umber and Burnt Umber in white spirit and application of Mig Productions Dry Mud pigment with pigment fixer sprayed on to seal it. I then rubbed sand paper over those parts of the tracks which would be in contact with wheels or ground to show the exposed metal.