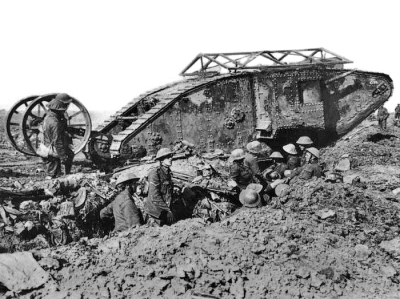 This is an unmistakeable looking vehicle (used on the cap badge of the Royal Tank Regiment) and the first operational tank in the world. First used in September 1916 during the infamous Somme campaign. The drawbacks to it were legion – the limited firing arc of the guns mounted in the side sponsons,  mechanical breakdown, archaic communications (they carried homing pigeons) and the terrible conditions inside – heat, noise, fumes and shrapnel. Later marks would prove to be more effective [1] [2].

I seem to keep coming back to these vehicles whenever a fresh model appears. The current one is by a company called Master Box, who have a bunch of Mk I tanks in their catalogue.