Obviously the place to start was a suitable base. I had seen some produced by a company called Scale Model Scenery – “BB002 Diorama Baseboard Large Centre“. Two of these linked together would be as big as my display cabinet could accommodate – a combined width of 81 cm. Also, there was a back board for the attachment of buildings. These were constructed easily with wood glue and a joining bolt.

I had had some experience with diorama bases – made of ceramic – from Fields of Glory Models. Looking through their catalogue I decided on the following items:

Now some of these had a corner unit at right angles to the front facing surface. I left these off, as I wanted a section of just the front of the buildings, with no interior (a bit like I imagine some film sets are constructed, so that if you were to look behind the back of them, they would just be wooden panels). All of was to maximise space in front of the buildings, for the debris\rubble and the lines of vehicles beyond that. Also, in order to fit the display space I had to trim the tops of some of the sections. Once the road sections were attached to the base, I held up the building sections to the rear board and drew around their outline. After this I cut away all the board bar those parts which would be use to hold up the buildings, as I did not think that my scenery painting skills extended to some kind of cityscape background. I am not able to comment on the “architectural correctness” of the row of buildings I ended up with. The models were selected to be approximately the right era and – as in my source photograph – represented a row of severely damaged buildings.

The ceramic pieces were easy to deal with. If, as with the road sections, I had to cut some of it away, it cut cleanly with no cracking. I glued all these pieces to the board using “Gorilla Epoxy“. Any gaps were filled in with “Multi Purpose Polyfilla”. There were some seams in evidence on the road, even after applying the filler.  I guess these sections – I used three complete units of the “Diorama Base – Tram Tracks”, plus various cut parts to fit the gaps – are not designed to be linked together, but they corresponded quite well, especially the tram lines. I was not too concerned about a perfect fit, as debris and rubble – plus the placement of vehicles – would cover most issues.

I used parts of the Miniart “Street accessories” (35530) set. So, after cutting the correct shaped holes in the road sections I glued in place the drains and manhole cover.

Finally, this thing is rather large, so impossible to photograph under my usual conditions (neutral blue background). So, all pictures going forward are going to be on the bench on in the display cabinet. 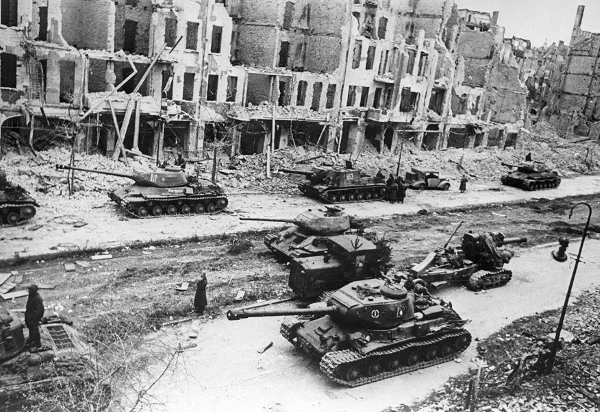 I remember seeing the above picture – as far as I know taken in the immediate aftermath of the Battle of Berlin – and marvelling at the vehicles in the shot. Here in close proximity were several of my favourite armoured vehicles of any era – T-34/85, IS-2, ISU-152 – as well as the B4 howitzer and tractor. So, when several months ago I pondered the possibility of constructing a diorama – as a new kind of project for me – I naturally returned to this photograph.

I am going to say straight away that I did not consider myself a natural in this area, having little experience. But, then again, I hoped that whatever I came up with would be something I would be OK with, which is really the only criteria in the end. I told myself that I would attempt something which would use this photograph (and others) as inspiration, but would in no way attempt to be a perfect copy. Anyway, as I write this I have got it to a place where I am quite happy with it. Once this base was finished, I could then proceed to add the vehicles, which at this time I have settled on as listed below. These will probably take me the rest of the year to finish.