3rd Guards Tank Army, Berlin, 1945 (the unit symbol is correct,  the number might not be – down to what spare decals I had).

Base coats: Using most of the Mr.Hobby Russian Green modulation set. In all cases the paint was sprayed as a 1:2 mixture in Mr.Color leveling thinner.

I am going to be doing two of these vehicles, to feature on my Berlin diorama. Therefore, I thought it might be a good idea to build them slightly differently. For this one, I have omitted any photo etch (except in one place – the brackets on the empty fuel tank holders), relying instead on my ability to alter the plastic parts to how I wanted them. There are a few compromises in places – some of the pre-moulded parts on the engine deck are a bit clunky, but I either choose to ignore them or obscure them with bits of stowage. Many pictures of the real tank show a lot of damage, especially to the fenders and fuel tank holders – see here, here, here and here – so I decided to try that. As in a previous similar attempt, I can’t be sure that I am fully accurate in what I have done, especially for the rear of the vehicle, but, well, once it is painted and weathered it is not that important! 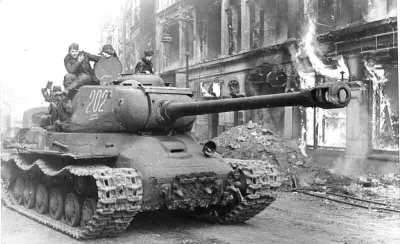 “The heavy tanks were designed with thick armour to counter German 88 mm guns and carried a main gun capable of defeating Panzer IV tanks. They were mainly designed as breakthrough tanks, firing a heavy high-explosive shell that was useful against entrenchments and bunkers. The IS-2 went into service in April 1944 and was used as a spearhead by the Red Army in the final stage of the Battle of Berlin.” [1]